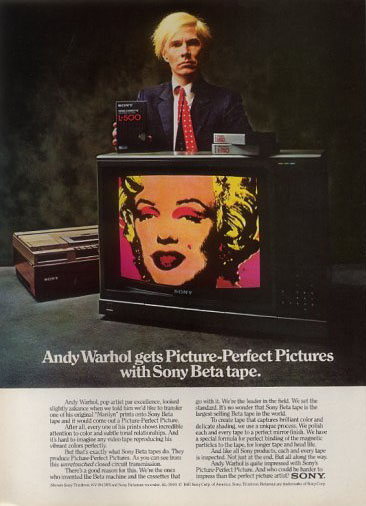 Andy Warhol defined the pop art movement of the 20th Century. His paintings are among the most recognizable images ever produced. In the mid-80’s, Andy Warhol was asked by Sony to do an art print for the juggernaut Walkman. Warhol designed the graphic pictured above, but it was unfortunately never really used. Sony also involved Warhol to appear in their magazine print ad for Sony Beta videotapes.

Warhol died in 1987 from post-surgery complications. Some critics have come to view Warhol’s superficiality and commerciality as “the most brilliant mirror of our times,” contending that “Warhol had captured something irresistible about the zeitgeist of American culture.” Learn more about Andy Warhol’s incredible life at Wikipedia.