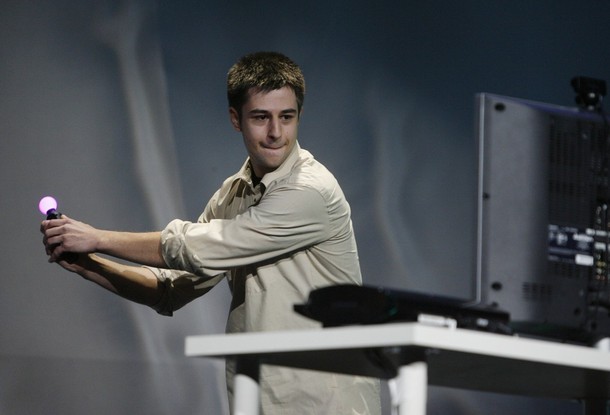 The PlayStation Motion Controller is a motion-sensing game controller under development for the PlayStation 3 video game console, which is used in conjunction with the PlayStation Eye webcam. It was unveiled at Sony’s E3 2009 press conference. The prototype controller consists of two wand units, each with buttons, analog triggers, and internal motion sensors. In addition, each wand unit features an orb at the end which can glow in a number of different intense colors. The colored lights serve as active markers, the positions of which can be independently tracked by the PlayStation Eye. The uniform spherical shape and known size of the lights allows the system to determine their distances from the PlayStation Eye in a wide range of orientations through the size perceived by the camera, thus enabling the wands’ positions to be tracked in three dimensions. Combined with the internal motion sensors, this allows for real-time motion capture with orientation in three dimensions with “high-precision, sub-millimeter” accuracy. According to Sony Computer Entertainment America (SCEA) President Jack Tretton, the PlayStation Motion Controller will be available in Spring 2010, but its hard to tell what will come at that point, and if it will be delayed.