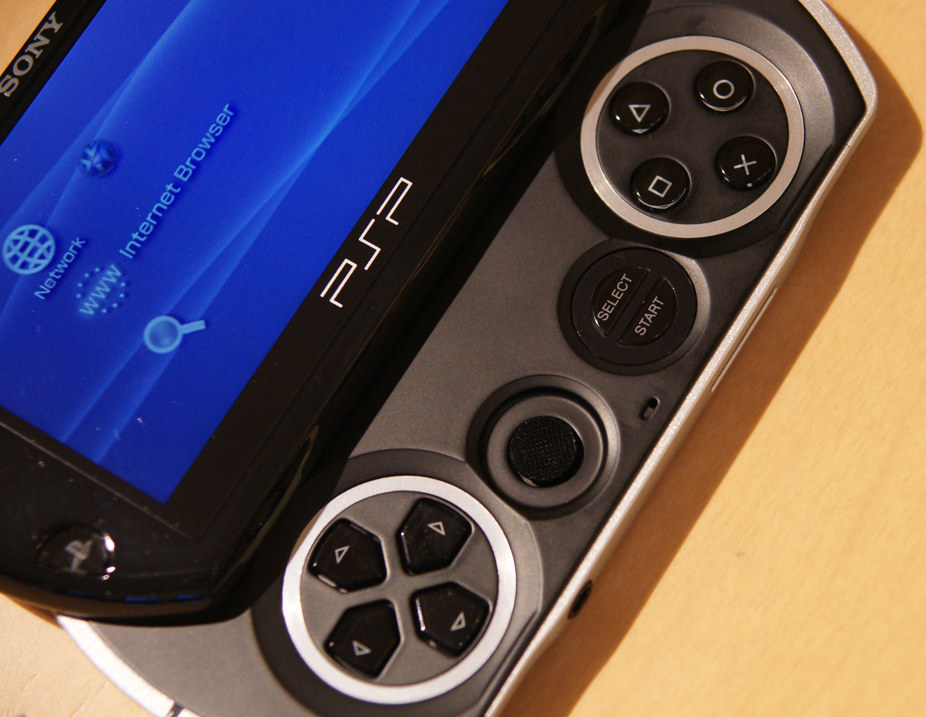 The PSPgo is the first total design change for the PSP hardware, and has received enormous criticism and praise from many consumers. It’s also the first all-digital PSP, costs $249, and still has left many wondering what will happen to their UMD discs. I was invited to attend a special hands-on demonstration of the PSPgo at the SonyStyle store here in Atlanta, Georgia the day before Sony will allow anyone to check out the PSPgo for themselves. Of course, you will still have to wait until October 1st to buy the device. Nonetheless, it was great to come back to the store, as I have always found it well designed and portrays almost all Sony products perfectly. The quality of the pictures in this post are the highest we’ve ever shot, as Sony allowed me to use a new A850 DSLR for this pictorial. Outstanding. A huge thanks to a special someone in Sony Media Relations for hooking us up with this opportunity.

Here is a video we shot covering the experience with additional hands-on with the PSP Go:

Many of you know the specifications of the PSP Go, but I will restate some of the key points – the PSP Go does not feature a UMD drive, but instead has 16GB of internal flash memory to store games, video, and other media. This can be extended by up to 32GB with the use of a Memory Stick Micro (M2) flash card. Unlike previous PSP models, the PSP Go’s rechargeable battery is not removable or replaceable by the user. The PSP Go feels very light – its so much lighter than the regular PSP and will definitely surprise you when you first hold it. The unit is 43% lighter and 56% smaller than the original PSP-1000, and 16% lighter and 35% smaller than the PSP-3000. It has a 3.8″ 480×272 LCD (compared to the larger 4.3″ 480×272 pixel LCD on previous PSP models). The screen is absolutely amazing, and after staring at an iPhone for so long I’d forgotten how fluid and brilliant the PSP display truly was. This is the most mature offering to date – there are no scanlines, ghosting, etc.

The screen slides up to reveal the main controls. The overall shape and sliding mechanism are similar to that of Sony’s mylo COM-2 internet device. Unfortunately, the PSP Go is extremely vulnerable to fingerprints and possibly scratches. You will definitely want some sort of case.

I think that the PSP Go’s price will seem hard to grasp for some consumers, but honestly after interacting with it for nearly a hour it feels justified. Its well built, lightning fast, and lacks the ghosting and other image issues that some have griped about in the past. It’s truly a shame that this wasn’t a phone, because I would drop my iPhone for it in an instant. The PSP Go is also much more attractive in real life – pictures and video do it some justice, but the entire presentation is satisfactory. I think it definitely looks better than the older PSP.

The PSP Go features built-in wi-fi, but no longer uses a standard USB A-to-Mini-B cable common with many devices. A new proprietary multi-use connector is used for USB connectivity. A suitable USB cable will be included with the unit. The new multi-use connector allows for charging and USB similar to previous units, but also allows video and sound output with the same connector (with optional Composite AV cable and Component AV cable), unlike the older PSP which had TV OUT functionality on a separate port to the USB port. Sony will also be offering an optional cradle for charging and USB data transfer on the PSP Go, similar to previous offerings.

The PSP Go adds support for Bluetooth connectivity, enabling the use of compatible Bluetooth headsets and tethering with Bluetooth-enabled mobile phones. This will also enable users to possibly connect and play games using a Sixaxis or DualShock 3 PlayStation 3 controller or Bluetooth headset.

Because the PSP Go does not feature a UMD drive, games are downloaded from the PlayStation Store. While other PSP models have included the ability to run games and demos downloaded from the PlayStation Store, the PSP Go is the first for which this is the only means of distribution. Unfortunately, the unit we were able to use for demonstration did NOT have any games pre-loaded, nor could we get the Internet to work. It was a little disappointing that I couldn’t at least play a game, but it was still a great experience.

The PSP Go can directly download to itself, or users can also download then transfer the games from a PlayStation 3 or the Media Go software on Windows based computers. All current downloadable PSP and PlayStation games available for older PSP models will be compatible with the PSP Go. Sony has also confirmed that all UMD based PSP games released after October 1, 2009 will be available for download, and a majority of older UMD-only games will also be downloadable at that time.

Here are some comparison pictures of the PSP go with the PSP-3000:

When you look at the PSP go next to the PSP in real life, it is so apparent that Sony needed to go in this direction moving forward. It’s aesthetically superior, and the controls feel natural. I don’t think it will take long for people to adjust to this new input layout. Side by side, PSP Go and PSP-3000: