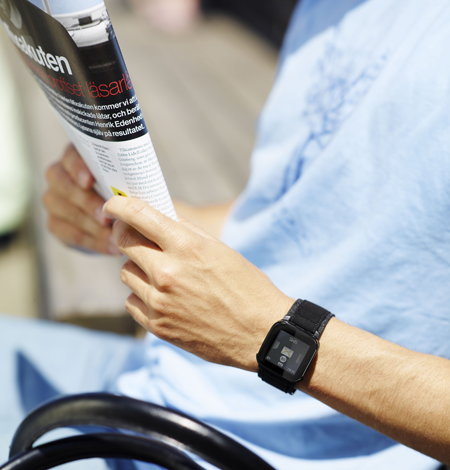 We wanted to take another look at Sony Ericsson LiveView, which is a micro display the company announced several months ago. The low-cost, thin, low weight 1.3 inch color OLED display (128×128) is crisp and can provide information from your Android phone through a bluetooth connection. It recently went on sale in several countries in Europe, and will eventually be available in the coming months around the world. Sony Ericsson is quick to state that its compatible with of course their XPERIA X10, X10 Mini, and X10 Mini Pro phones but it’s also compatible with many other phones running Android 2.0.

With LiveView, you don’t have to take your phone out of your pocket to check up on the usual suspects, such as texts, e-mails, and Facebook/Twitter statuses. Its all available in this tiny display, which has much more functionality than you think. In some ways, its that geeky watch I’ve always been looking for, and the four day battery life is not too shabby especially when it can be recharged very easily via the common MicroUSB cord. Sony Ericsson even knows they have created the ultimate Android accessory, a watch, by including a wrist strap when you buy the device. Cost? Less than $50-75 equivalent in most European countries, so the outlook is good here for a similar price range.

I currently have an iPhone 4, but when I switch over to Android (the PSP Phone) this will be a must have.

The features are great and keep expanding. Here’s an idea:

What’s really neat is Sony Ericsson is not letting this turn out to be a one-trick pony, as there will be more apps for the device in the future. Finding LiveView-enabled apps will also be a breeze, according to the official press release:

Sony Ericsson UK has a brief LiveView compatibility list (which is in no way complete, just merely an example):