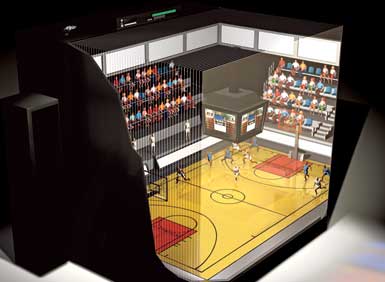 Display technology is a very fast-growing area in the global economy, and Sony has been a huge player in it for a while. In the last twenty years we have seen amazing improvements with such technology. In the last few years however the predominant focus in television technology has been the outro of Plasma and the rise of LCD. A new challenger is being ushered in by Sony, which is OLED, but what are we expecting a decade or so from now? It’s Holographic TV’s, and major barriers that restricted the technology from becoming a consumer electronics item have been broken.

There are people working on the technology as I write this, and its maturing rapidly with each passing year. The Japanese Government is pushing huge financial and technical weight into the development of three-dimensional, virtual-reality television, and the country’s Communications Ministry is aiming at having such technology available by 2020. Sony would obviously be involved with this in some capacity as they have always been at the forefront of display technology. However, it is being reported that there aren’t any real big sponsors from the consumer electronics industry in this technology..yet.

CNN writes, “Dr Nasser Peyghambarian, chair of photonics and lasers at the university’s Optical Sciences department, told CNN that scientists have broken a barrier by making the first updatable three-dimensional displays with memory.

“This is a prerequisite for any type of moving holographic technology. The way it works presently is not suitable for 3-D images,” he said.

The researchers produced displays that can be erased and rewritten in a matter of minutes. To create television sets the images would need to be changing multiple times each second — but Peyghambarian is very optimistic this can happen. He said the University of Arizona team, which is now ten-strong, has been working on advancing hologram technology since 1990 — so this is a major step forward. He believes that much of the difficulty in creating a holographic set has now been overcome.”

Examples of how this technology would work is a display of a football game on a table, or movie characters able to appear and disappear between walls. The potential is unlimited, and could essentially turn households into a movie set. Imagine a war scene inserted into your living room from an wall-based 3D Holographic Projector, where your couch could be the bunker that movie characters use to hide from suppresive gunfire and grenades. There are also several applications beyond the home the technology could be used at, such as military and medical displays for optimal efficiency and accuracy.

I would hope that if the technology does become mainstream one day that they have a set up system for the room the holographic television is being installed in. If objects and items in your home could be mapped out and integrated into the action somehow. The world would have to update their broadcast and film equipment as well for this technology, since conventional camera work probably could suffice to be a true source for holographic 3D. So, while the thought process behind this is attractive, there are still many barriers and upgrades needed to make it work.