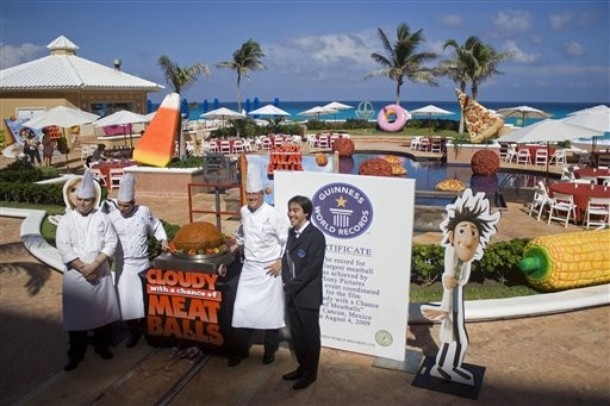 Cloudy with a Chance of Meatballs is a computer-animated parody film produced by Sony Pictures Animation and distributed by Columbia Pictures. It is scheduled for a theatrical release on September 18, 2009 (also in 3D) and is inspired by the children’s book of the same name by Judi Barrett and Ron Barrett. The film features the voices of Bill Hader, Anna Faris, Bruce Campbell, James Caan, Mr. T, Benjamin Bratt, Neil Patrick Harris, Al Roker, and many more known personalities. To promote the film, Sony and the executive chef of the Ritz Carlton hotel in Cancun held an event where Rainer Zingrebe broke the Guinness World Record for largest meatball at 109 pounds (49.5 kg.). That’s a spicy meatball! You could feed an army with that thing. Carlos Martinez, an agent of Guinness World Records, was on hand to verify the claim.

Oversized fake meatballs, plates of spaghetti and slices of pizza are seen in a swimming pool at the Ritz Carlton hotel in Cancun, Mexico, Thursday Aug. 4, 2009. The decorations were made as part of an event to promote the recent animated Sony film “Cloudy with a Chance of Meatballs” and to try to break the record of the biggest meatball in the world.

Here’s the most recent trailer of the film: