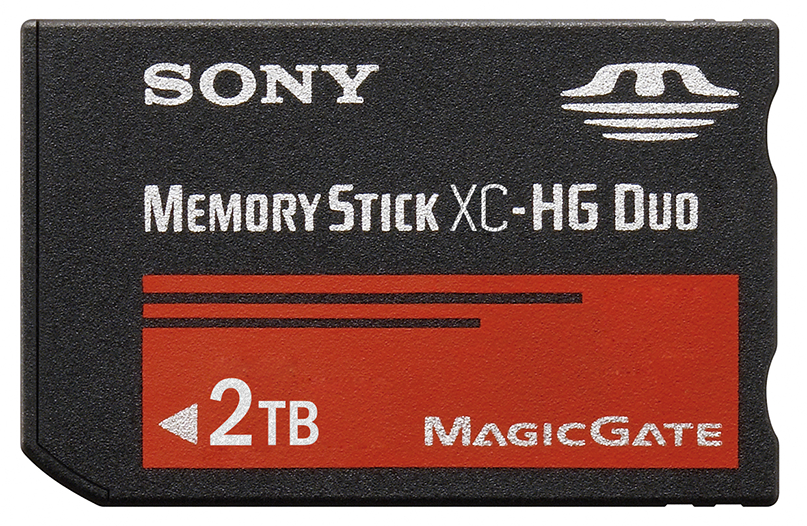 Sony has finalized specifications of Memory Stick XC, which was also known back during CES 2009 as “Memory Stick Format Series for Extended High Capacity.” At that time, Sony had mentioned that this new Memory Stick would have 2TB maximum capacity, but details were rather scarce. A new page on Sony’s oss-formats.org website has listed all of the details for the Memory Stick XC, which is really exciting especially considering that the form factor for these new flash cards are (on paper) the same as pre-existing memory sticks, which means that these high capacity juggernauts are most likely backwards compatible. The entire cast and crew are back, including Duo, Micro, and the HG variants. Additionally, the XC series also uses the much more efficient exFAT file system, while the PRO series uses FAT12/16/32. The 2TB Memory Stick Duo picture used in this story is a photoshop by yours truly, but this won’t be much different than the real thing. License agreements for the Memory Stick XC are now available to interested hardware manufacturers.

Update: There seems to be some confusion amongst the Internet about this story. A 2 TB maximum capacity doesn’t mean that you will see a 2 TB Memory Stick XC next year. That is probably years away – however, it does open the door for 64GB, 128GB, etc; a natural progression to the 2 TB limit is to be expected.

This information is a Sony Insider exclusive, brought to you here first. Thanks to whomever anonymously sent this to us.