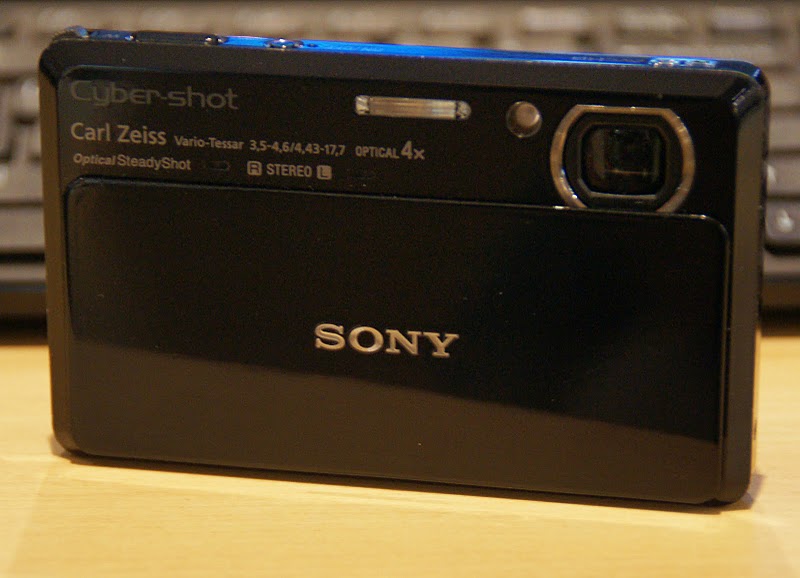 The Sony DSC-TX7 could possibly be one of the greatest point and shoot ultra slim cameras ever created. It truly is a pinnacle of Sony’s commitment to quality in its twenty five years of making Cyber-shot cameras. At $399, it also surprisingly faces stiff competition in the ultra slim category from giants such as Samsung, Canon, Nikon, and others.

What Sony brings to the table with the TX7 makes it a real player in comparison to anything else out there. Lets go over some of the basic features before we start our review – the TX7 has a 3.5″ touch screen, “Exmor R” sensor, iSweep Panorama Mode, 10fps at full 10.2 megapixels, Anti-Motion Blur / Hand-held Twilight, AVCHD Movie mode, Optical SteadyShot, and 4x optical zoom. And while that list may seem exhausting, that’s not even everything available on the TX7 – it’s merely the beginning.

When you first hold the TX7 you can most certainly sense that this isn’t some flimsy camera. It’s very well-built, and is very slim. The design of the camera is nearly unmatched in this category; only what I’ve seen from Nikon’s Coolpix line of cameras could even come close. It is available in three colors, ranging from Red, Silver, and Dark Blue. Turning on this T series Cyber-shot is as easy as its predecessors – you simply slide down the lens cover and away you go. The TX7 turns on very quickly, in a mere matter of seconds.

Buttons are few and far between and that’s how it should be for a touchscreen camera – the only things to push or move is the On/Off, Tele/Wide button, camera, and movie buttons. However, the Tele/Wide (aka zoom) button is on the upper right side of the camera, which seems something Sony integrated out of convenience, but could prove to be a challenging aspect in everyday usability. There is a slider on the bottom of the camera that allows access to the battery compartment and SD/MS Duo slots. Yes, you read that right – this TX7 can use Memory Stick Duo and SD (HC) cards.

A special note about the MS Duo slot – it also accepts the 8GB MS Duo TransferJet card MSJ-X8G, which is compatible with the TJS-1 TransferJet Station. We’ve covered TransferJet extensively in the past, but basically its a wireless technology that lets you to wirelessly share photos and videos with other TransferJet devices. So, take a picture with your DSC-TX7 with MSJ-X8G card, then put the camera on top of your TJS-1 and view pictures on whatever the TJS-1 is connected to (via USB, which can connect to computers, TV’s, photo frames, etc). It’s really cool technology that allows rapid transfer of pictures wirelessly. I’ve seen TransferJet in person and it is not slow whatsoever, and its short range transmissions doesn’t interfere with any other common wireless band (4GHz).

Don’t think the technology is vapor, either – it is backed by large consortium of companies such as Samsung, Canon, Nikon, Olympus, Toshiba, and so many more. You will be seeing TransferJet integrated into many new future consumer electronic products in the coming years. Unfortunately, new technology also brings a high price – the 8GB MS Duo TransferJet card MSJ-XG8 is $99, which the USB base station TJS-1 is $149. If you were to buy everything together for the optimal TransferJet experience, including the aforementioned accessories and the camera itself, it would run you more than $650. Time and ubiquity will bring these prices down, but it will be a considerable amount of time from now.

The back of the DSC-TX7 is home to a large 3.5″ touch screen LCD (921k pixels), that has TruBlack technology. Reviewing pictures looked very crisp – not OLED crisp as you would see in several of Samsung’s point and shoot cameras, but most certainly best in class. Sony display technology is usually great in small form factor devices. The touchscreen was very responsive and didn’t detract from usability whatsoever – it was very convenient to use. It also enables you to select the focus point with a simple touch, scroll through images by sliding your finger across the screen and one-touch access to the menu. We also appreciated the Ultra AR film coating, which noticeably reduced reflections and favorably increased contrast and brightness in bright situations. I remember in the days of old when it was annoying to review a picture you just took while outdoors, as I usually had to hold my hand over the top of the screen to see it properly.

The TX7 can take some truly amazing pictures (as seen above, courtesy of AV Watch), and the reason for that is the 10.2 megapixel “Exmor R” CMOS image sensor that brings out the full power of the camera’s Carl Zeiss Vario-Tessar lens. Sony kept things pretty average with the optical zoom, which remains at 4x this year. The camera can deliver extremely fast speed, high resolution pictures, and stunning low-light sensitivity with improved image clarity and drastically reduced grain. A lot of that may seem like marketing speak, but if you can take one thing away and one thing only from reading this entire review, then understand that Sony’s 2010 camera line-up with the Exmor R CMOS image sensor makes a huge difference in low light situations. It really is a big change, and one that we are so happy to finally see. For so long it felt like we were in a megapixel race, but now as that has finally come to pass you’ll soon realize that this improvement is one of the most important features to hit point and shoot cameras in many years.

Unfortunately, I did notice that the placement of the lens may make it easy for people to accidentally put their finger in the picture, and will require people to hold the camera specifically to avert this that will be easy remembered after several uses.

Battery life is pretty great with the new super slim type of batteries Sony is using with this camera – the NP-BN1 Lithium-ion N Type rechargeable battery is capable of about 230 images per charge, or approximately 115 minutes of shooting still images as listed on SonyStyle. The TX7 also comes with a stand that has connectivity options such as DC In, USB, A/V Out (stereo), and HDMI out.

There are just so many smart aspects of this camera that really make sure you never miss the perfect shot. In some ways, the camera works overtime just for you to ensure this. For example, when the camera is set to Soft Snap, the Anti-blink function captures two images, recording only the photo with less squinting or blinking. If a blink is detected in other shooting modes, a warning will be displayed after you take the shot. The Self-Timer, pictured above, can do the routine 10 second wait, 2 second wait to take a picture, or take advantage of the facial detection and capture a picture when a person is detected, or two people. Now that is impressive. Sony’s Face Detection technology detects up to eight individual faces and adjusts flash, focus, exposure, and white balance to help deliver crisp, properly lit images of family and friends.

Here are some of the settings in the camera one may encounter:

The camera is also a bit of a quick shot, in two very special ways. The Handheld Twilight mode allows you to take six images in less than a second with the push of a button, and combines all six images together that results in great detail and low noise. This method is also present in the Anti-motion Blur mode, which also takes six images and combines them together to vastly decrease subject blur.

In addition to High Sensitivity Mode (ISO), you can select up to seven ISO settings (Auto, 125, 200, 400, 800, 1600, 3200) when shooting in Program Auto Mode to adjust sensitivity to your shooting conditions. This compliments the TX7’s motion detection features quite nicely, along with face motion detection, which adjusts ISO sensitivity and increases the shutter speed when movement is detected, reducing blur in moving subjects and faces. Also, the auto focus is ultra-quick and locks focus in as little as 0.3-sec.

Unlike traditional auto mode, the included Intelligent Auto (iAuto) mode thinks for you, recognizing scenes, lighting conditions, and faces, and adjusts settings resulting in clearer images, faces with more natural skin tone, and less blur. This is achieved by incorporating advanced features such as Intelligent Scene Recognition, Face Detection technology, and Optical SteadyShot image stabilization. Whether you’re shooting landscapes, capturing a beautiful flower, or taking pictures at an in-door birthday party or wedding shower, iAuto mode will optimize your camera’s settings to help ensure you come away with a great shot.

On top of iAuto, the TX7 also has Intelligent Scene Recognition (iSCN) Mode, which automatically detects nine different types of scenes and, within just 1/30th of a second, selects the appropriate camera settings: Backlight, Backlight Portrait, Twilight, Twilight Portrait, Twilight using a tripod, Portrait, Landscape, Macro, and Close Focus. iSCN has two modes: Auto and Advanced. In Auto Mode, the camera takes a single shot using the optimal settings. In Advanced Mode, the camera takes a photo with the optimal settings and, if in difficult lighting (low light or back light) immediately takes a second photo with another optimized setting so you can choose which to keep.

They also upgraded the popular Sweep Panorama mode this year to Intelligent Sweep Panorama Mode, which now shoots 258 degrees. Press shutter and sweep and the camera does the rest, continuously, shooting images and in one second stitching them together. In the picture above, captured with the TX7, you can see the technology is almost bulletproof. This model even detects faces and moving subjects to stitch intelligently different widths to help avoid subject distortion. However, in our further tests, we found that it couldn’t fix everything, as there was some object distortion in some of the products captured with our panoramic shot below within SonyStyle at Atlanta, GA.

A feature I’m hesitant to really gush on but felt the need to include was the expansion of some creative painting tools, which allows you to decorate photos with words, drawings, etc. This feature was truly popularized in the minds of some US consumers by Nikon’s commercials with Ashton Kutcher. Aside from a paint pen (your finger is the brush), there are more than 30 stamps and 15 types of picture frames you can color your picture with, but unfortunately it will downgrade the image quality to a maximum of five megapixels.

All things considered, we recommend the TX7 if you have the money to spend. There are many alternatives out there for less, but few bring this level of quality. I’ve looked at the competition and I truly believe Sony will be ranked very highly in point and shoot for 2010 Digital Imaging sales, customer satisfaction, and so forth. And for those of you still reading, a special gallery of the DSC-T90, DSC-TX1, and DSC-TX7.