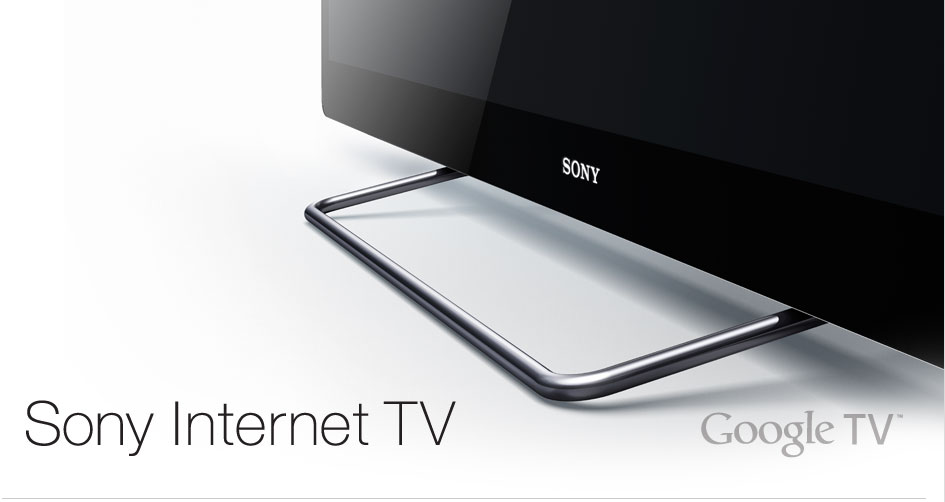 Google has detailed a new Sony TV during the Google I/O conference, officially called Sony Internet TV (official site). This will be the most advanced TV ever released by Sony to date, and was built in collaboration with Google and Intel as previously reported. The TV will be based on the current monolithic design influenced Sony BRAVIA NX800 (shown above), and will most likely come in 46″ and 52″ screen sizes – although we would not be surprised if it only came in one size.

They have integrated Google search and other features into a new service called Google TV, which will come to (yet to be released) Sony BRAVIA TV’s and Blu-ray players this Fall. Google TV is built on Android 2.1, has Google Chrome and a full version of Flash 10.1. You can search for programs, schedule recordings, or use the search to go to your favorite TV station. They have also shown off an Android remote (on an Android phone) that allows flawless voice search for TV programs. Google TV also allows you to watch programs in a picture-in-picture format – e.g. a small screen to the right plays your TV station in an overlay on top of the Google Chrome Internet browser.

Here are some screen shots from today’s presentation (additional coverage at Engadget, Gizmodo, and the Sony Blog):

The NYT is reporting “Google Moves to TVs With Help From Intel and Sony“:

Howard Stringer, chief executive of Sony, the ailing Japanese electronics giant and the third-largest maker of flat panel televisions in the United States market, appeared on Google’s stage to say Sony would build Google’s software into a line of its high-definition Bravia televisions that connect to the Internet, as well as some of its Blu-ray players.

Intel will provide its Atom processors for the devices. It has spent billions developing those chips over the last few years in a high-stakes push to crack the market for consumer electronics.

Devices running Google TV will also be able to run applications written for Android phones, and will feature Google’s Chrome Web browser, which would allow consumers to surf the Web from their television sets.

Logitech, a maker of peripheral devices for computers like keyboards, mice and webcams, will manufacture a set-top box running Google TV, called the Buddy Box, which will allow people to get Google TV without having to buy a new television.

As quoted in the NYT, the real power play is that the TV will support the Android Store and most likely support the upcoming Chrome Web Store, as well. This could open up the opportunity for the TV, as we know it, to become truly intelligent and run thousands of applications later this year. We were not able to confirm if the TV will have built-in flash/hdd storage.

One of the most interesting aspects of the television will be the Intel Atom processor inside; we’re nearly certain that it will have the 45nm-based Intel Atom 1.2GHz CE4100 series processor (PDF). What are the capabilities of this processor?

More than one would think.