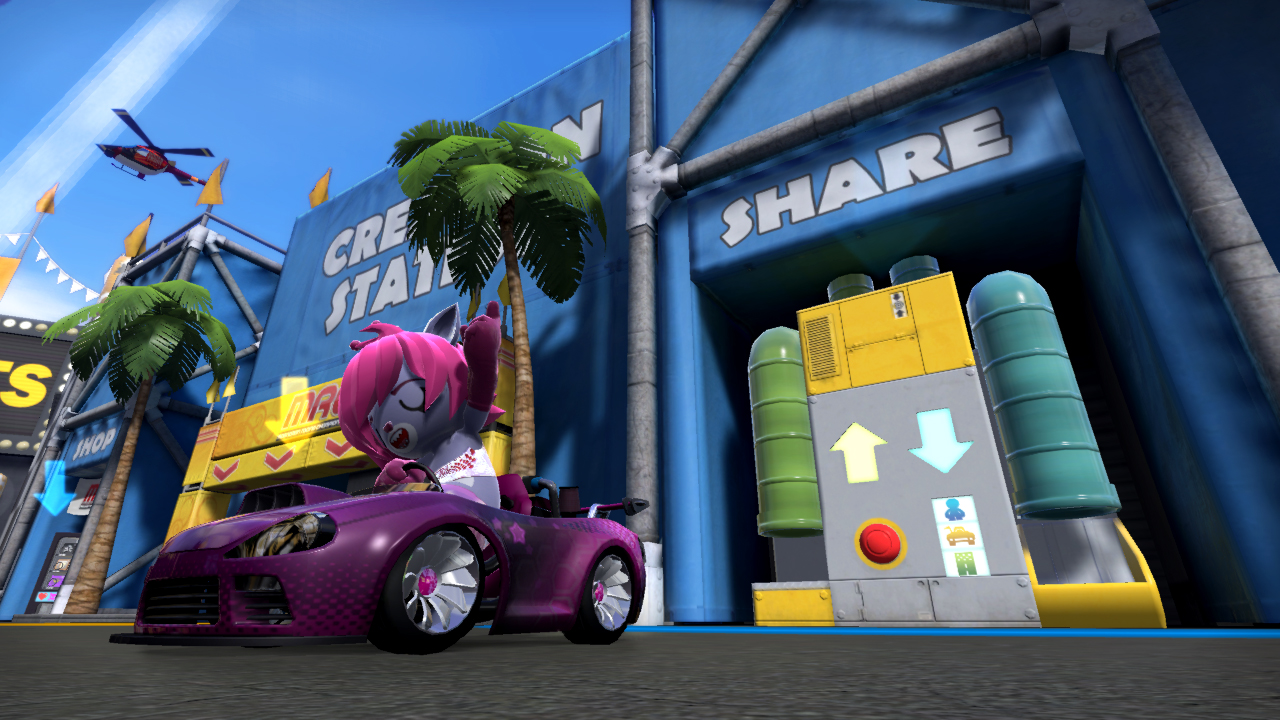 ModNation Racers (PS3, PSP), developed by United Front Games and Sony Computer Entertainment Worldwide Studios (San Diego), brings an entertaining twist to classic kart racing, while empowering players of all levels to fully customize and design their entire racing experience. The second title in PlayStation’s PLAY, CREATE, SHARE series, ModNation Racers allows players to not only enjoy developer-made content, but unleash their imagination with easy-to-use editing tools to generate customized tracks, karts and characters that can be uploaded and shared with the ModNation community via PlayStation Network.

ModNation Racers’ user-friendly creation tools feature a simple interface and a robust menu of options to trick out tracks, karts and drivers with a variety of accessories. If players are not feeling creative, ModNation Racers also features a Story Mode with a humorous narrative and a wealth of pre-made characters, karts and over 25 tracks to try. Here’s a video review courtesy of IGN:

“We continue to deliver on the success of PLAY, CREATE, SHARE movement with ModNation Racers as the next title in the series started by LittleBigPlanet,” said Scott A. Steinberg, Vice President, Product Marketing, SCEA. “Combining deep customization with solid kart handling, and online multiplayer options, ModNation Racers brings a creative and interactive kart racing experience to life. It’s a breath of fresh air in the kart racing genre only available on PlayStation.”

ModNation Racers’ single-player career mode tells the tale of Tag, an inexperienced racer given the opportunity to compete in the world famous ModNation Racing Championship. Players with the PS3 system will dive into the ModSpot, the game’s central hub, showcasing each game mode including career, online, creation, and more. In the ModSpot, players can check out the community’s top Mods and Karts, enter Hot Lap tournaments, play the Top Tracks voted on by the community, and socialize with other racers. ModNation Racers also delivers Career Central mode leading players to beat the computer and unlock more content for creation.

Players of all ages will keep coming back for more ModNation Racers with an infinite number of customizable possibilities for cars and drivers. Players can CREATE unusual and unique racers by resizing character features such as eyes and ears, applying different skin designs and colors and trying on different apparel options. With kart creation, players can choose between dozens of body types, from school buses to sports cars and customize with an array of parts, ornaments, decals, and paint jobs.

In just minutes players can build a track or spend hours perfecting it with the same tools the developers used to design the game. By simply driving, players build a track that is laid out behind them. Players can create tunnels, bridges and hairpin turns as well as alter the terrain and morph the land to form mountain ranges, lakes, and more. With auto-complete, players can finish their track at any point during the building process and instantly populate it with obstacles and scenery. Whether a player builds a track covered in weapons or a narrow road for pure racing, the depth of track creation in ModNation Racers truly offers players a unique racing experience.

ModNation Racers features multiplayer options for both the PS3 and PSP systems. The PS3 system version includes split-screen racing with up to four players offline and two player split-screen online. Players also have the option to go online and battle against 11 other players on the PS3 system version. The PSP system version allows up to six players both online and offline. Through PlayStation Network, players can SHARE their creations with the rest of the world and interact with the community on the platform by uploading racers, karts and tracks online for others to experience.