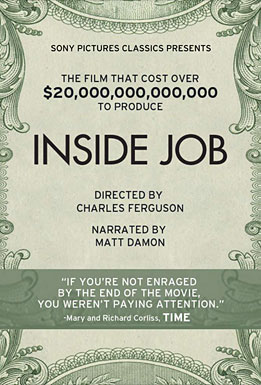 Inside Job is a 2010 documentary from Academy Award nominated filmmaker, Charles Ferguson (“No End In Sight”), and is the first film to expose the shocking truth behind the economic crisis of 2008. The global financial meltdown, at a cost of over $20 trillion, resulted in millions of people losing their homes and jobs. Through extensive research and interviews with major financial insiders, politicians and journalists, Inside Job traces the rise of a rogue industry and unveils the corrosive relationships which have corrupted politics, regulation and academia.

Narrated by Academy Award winner Matt Damon, the Inside Job was made on location in the United States, Iceland, England, France, Singapore, and China. The movie was screened at Cannes in May 2010 and is scheduled to be released in the USA by Sony Pictures Classics on October 8th, 2010. One of the first catchy marketing lines being used is that this is “The film that cost over $20,000,000,000,000 to produce.” Be sure to also check out the Inside Job official website and Facebook page.