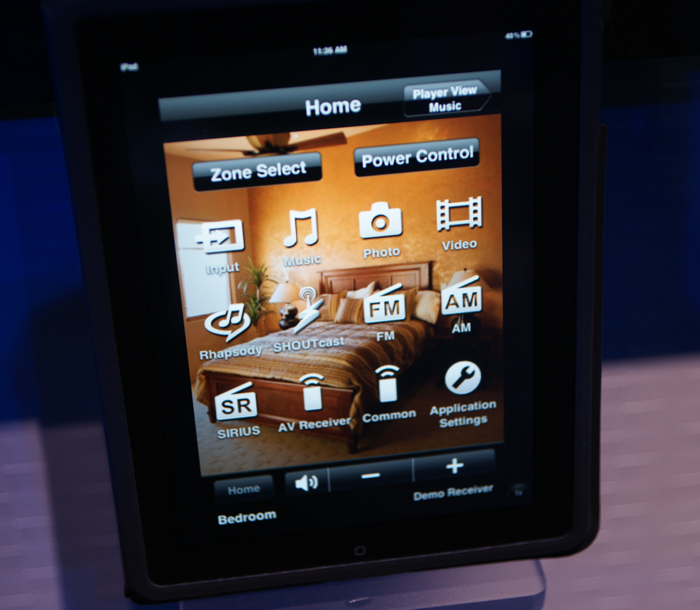 During CEDIA 2010, Sony showed off its innovative multi-room (aka zone) remote control app that is available for iPhone (and iPad) called AV Receiver Remote. The app basically allows you to operate your Sony receiver and/or components connected to your Sony receiver (such as a Blu-ray player). The software is pretty amazing for its first version, and allows you to do many things. We were impressed with the ability to select zones and set custom backgrounds for them, and power control so you can turn on lights in the desired room.

The app also allows you to select the input for the receiver, and also play specific music, photos and videos on your TV. Rhapsody, Shoutcast, FM, AM and Sirius options are also available that allow you to tune into your favorite feed. There are even macros you can program so your usual routine becomes extremely simple (e.g. theater, party, going away settings).

I soon realized that this app, especially on an iPad, is an incredible all-in-one remote control. Not only odes it control media, but it can also do lights. While AV Receiver Remote cant rival more expensive custom solutions, the fact that the app is free is a great play by Sony. You can download the app on the iTunes store and actually play around with it in demo mode.

The AV Receiver Remote app, in its first version, is pretty amazing. However, we would like to see Sony update the app to support the retina display on the iPhone 4. We also were a little disappointed that the app, on the iPad, had to be scaled to size using the built-in app zoom.

Here are some various pictures of the app in action. If you can’t see the pictures when they pop up because the video is blocking them, just scroll down past the video then click on the image again.

The following Sony receivers are compatible with this application: