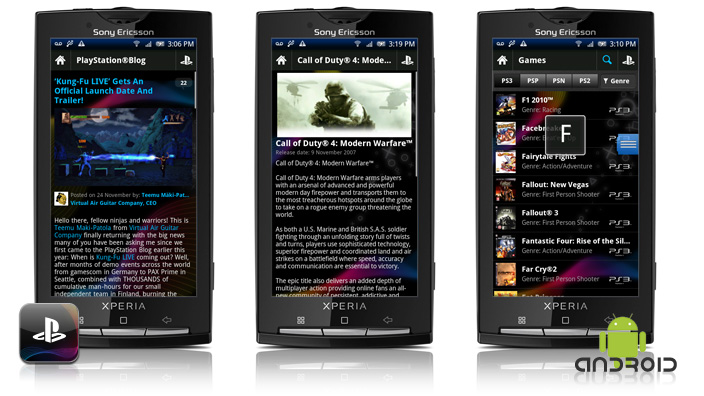 Several weeks ago the European PlayStation blog revealed an upcoming app for iPhone (OS4) and Android (1.6+) devices. The masses rejoiced. Things got even sweeter when PlayStation Portal Manager Emmanuel Orssaud said that the app should be available around Christmas on the EU blog. That didn’t exactly happen, but I imagine the app will be available any day now.

The announcement of the PlayStation app has met a mixed reaction, but mostly positive. It’s not heavy on features, but does show potential. Do not expect to play games through the PlayStation app. The next major update will most likely have access to streaming (on-demand) video and music services, such as Qriocity.

The first version of the app should be referred to as “setting up shop.” Initial features are admittedly basic, such as interacting with the PlayStation Network. You can view trophies, compare them with your friends and check out their online status.

There’s also a “Browse All Games” feature which contains a list of games for PS3, PS2, and PSP – sort of like a digital guide with game description and related media. There’s also a built in link to the PlayStation EU blog.

Strangely enough, SCEE also said that the first version would only be available in UK, France, Germany, Spain, Italy, and The Netherlands. This left many countries in Europe out of reach for the time being. Gamers began commenting in the official announcement about this and Manager Emmanuel Orssaud replied with word that version 1.1, confirmed for January, would add more territories. He actually confirmed v1.1 would be available for Russia, Australia, New Zealand, Ireland, Portugal, Norway, and Poland. We fully believe it will be available for the USA with v1.1 if all of those other countries will get it.

Perhaps v1.1’s availability will coincide with the long-awaited PlayStation phone announcement. I don’t think that’s going to happen at CES, though.

There was a lot of side information about the incoming app confirmed in the comments of the official announcement. Emmanuel also made it pretty clear not to expect the PlayStation app to hit Blackberry, Symbian, and Windows Phone 7 platforms. Ouch.

Don’t worry Apple lovers – there was mention that they “are looking into an iPad version for later.” There’s also “plans” to make a PlayStation widget for Android devices.