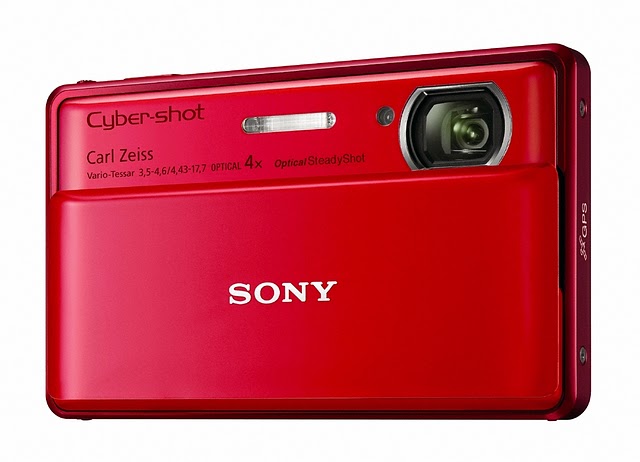 Sony’s flagship point and shoot camera announced at CES 2011 is the new DSC-TX100V. Featuring a goregous 3.5 inch OLED screen, you can review and show off your pictures with color reproduction far superior to LCD.

Aside from that bombshell, there’s also the fact the TX100V records in full 1080@60p mode. At the time of announcement, this is supposedly a world first for compact digital still cameras, but we expect that to become the norm amongst the competition in 2011. The quality should be pretty excellent, as the company has the reputation to jam high quality sensors in a tiny package. We are definitely going to record some test videos for you to check out soon.

Colors available for this little dynamo include silver, back and red this March. Price is high end for this product category at $380, but it should be a heavy contender compared to the competition.

Sony has crammed in even more groundbreaking features with the introduction of 3D Still Image capture, a first for this generation. Sony is also bringing back the 3D Sweep Panorama mode. Perhaps the combination of these two features will entice the consumer to become more interested in 3D. Hopefully we can upload this type of content to Facebook one day.

The camera also touts a Sweep Multi Angle, which simulates the 3D effect of the photo you’d see on TV, but on the camera screen by merely tilting the device.

For quick use of the TX100V in any situation, Sony has updated its Auto modes, and have also included 36 still picture modes. There’s also a background defocus mode, which is commonly found on DSLR’s, interchangeable lens cameras (such as the NEX series, Samsung NX or Olympus Pen). Background defocus can really make for some nice shots, and will delight digital imaging enthusiasts.

As for specifications, the popular and high quality 16.2 megapixel/10fps Exmor R CMOS sensor is back again, which shoots brilliant photos even in low light. We’ve shot with a Exmor R-equipped device before in the past and it blows away cameras from years prior that don’t have this technology.