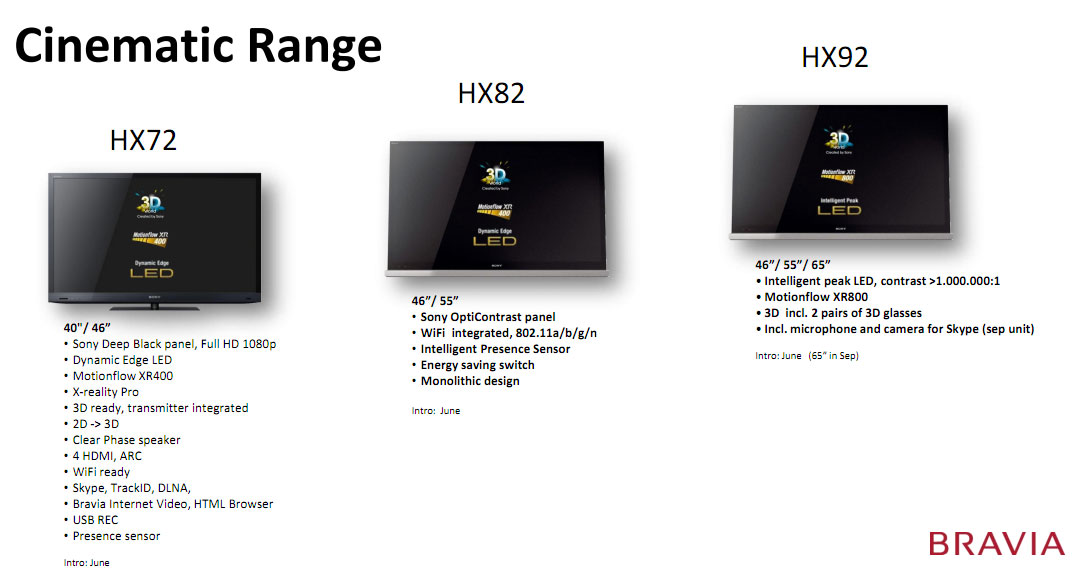 We all know that CES product extravaganza usually would be a good indicator of what to expect pretty much for all markets and not just the US, however it looks like January 20th was a big day for Sony Europe and Sony Japan, where the company officially revealed the Bravia family line up and also announced some pricing information. It is interesting to note that in the Japanese event in Tokyo has not revealed any information on the high end model – the HX92 series range.

However, the event that took place in Copenhagen brought forth some interesting details and classification of the Bravia offerings. Expect to see the following in Europe: there are three ranges that Sony would like you to look at while choosing your new TV:

Here is a pricing table available for some of the models above:

In Japan similar models were introduced except the high end HX models (most likely will be revealed later since they won’t be shipping those until late summer) and a number of Internet enabled apps will be included, for example what surprised us the most is a Twitter application is present in Japanese models and has been totally omitted in the US and EU models, and I am sure we all on this side and the other side of the pond tweet a lot! Bravia XBR10 was the last one to feature Twitter here in the US back in 2009.

Lots of other apps are included and are specific to Japanese market like DMM.tv, U-Next, Shufoo, Public Transportation schedule, Life-X (a combination of photo sharing services), acTVila and even Felica.

Sony’s CES Bravia Line-up In Japan from SpacePigTV on Vimeo.