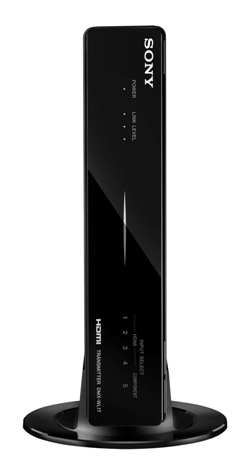 Update: WHDI technology has a much greater distance than 5 to 20 meters – it’s 100 feet and beyond. Specifications listed below for this device aren’t final, based on numerous sources, and subject to change.

At long last the pieces are finally coming together regarding Sony’s first WHDI* device, the DMX-WL1T. Featuring four HDMI inputs, one component input, one digital audio input, and a stereo analog input, this device will support just about any home theater configuration. The two-piece system transmits uncompressed 1080i video and audio to a Sony DMex compatible BRAVIA HDTV wirelessly with a range up to 5 to 20 meters, far less than the 100 feet that the WHDI website says the technology is capable of. A reciever base station and transmitter is included; the wireless streaming HD will most likely be a product that can only work with DMex capable Bravia televisions – yes, a proprietary Sony technology. It does seem that you will be able to control other third-party devices through the three IR Blaster ports located on the back of the device, however.

This product will debut in September or October, most likely announced later this month at the IFA conference in Berlin. Price hasn’t been set, but one could imagine that it would be in the general range of $350 – $500. That is a firm estimate on the price, but there is no word as to if it will be lower and higher. This is merely an assumption from observing Sony’s pricing routines for the last decade or so. One must also factor in that this is the first generation of this product, so it is not totally unbelievable to think that this will cost a bit more initially and become cheaper as the technology becomes commonplace. This collected information is a Sony Insider exclusive, brought to you first.

* – WDHI is a brand new technology developed by Amimon, Hitachi, Motorola, Samsung, Sharp, and Sony that provides a high-quality, uncompressed wireless link which can support delivery of equivalent video data rates of up to 3Gbps (including uncompressed 1080p) in a 40MHz channel in the 5GHz unlicensed band between a HD source and a HDTV.