Sony has announced six stylish, yet functional high capacity Blu-Ray Burners/HDD Drives capable of recording in full HD (1920×1080 MPEG-2, 5.1channel sound amongst other recording options). The BDZ-X100 (1TB), BDZ-X95 (500GB), BDZ-L95 (500GB), BDZ-L55 (320GB), BDZ-T75 (320GB), and BDZ-T55 (320GB) were all revealed today by Sony Japan. The X-Series is for the hardcore, the L series for the photo/video enthusiast (it can read from several storage cards), and the T series is somewhere inbetween. It is not immediately known as to the fate of the international debut of these products, but we can assume that at least a few of these models will in some form. The BDZ-X100 and BDZ-X95 will include an HD digital tuner, the DRC-MF (v3) chip, DLNA capablity and the highest capacity hard drives included with a Sony Blu-Ray burner (at a heavy price). Here is a translated chart of the options found in each (click for more detail, and yes, we understand some of this may not make sense) :

There are several recording modes common to each device, and are as follows: 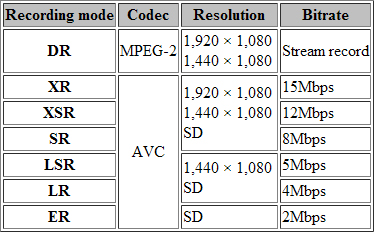 So, all will be capable of playing BD-RE ver.2.1、BD-R ver.1.1/1.2/1 (including all BD-Live!), DVD+RW/+R/+R DL/-RW/-R/-R DL, and all CD-rom formats. CATV hookup(s) are included in the rear as well as two HDMI ports for the X series; the others will have one HDMI input. Common I/O amongst the devices include an ethernet jack, USB (2 for L Series, 1 for X, none for T), digital audio output, analog video/audio, S-Video, composite and component on several models. All of these new Blu-Ray Burners/HDD combos will have Sony’s beautiful xvColor, which is a stunning enhancement for color reproduction, a new CREAS chip (upscales 8/10-bit TV’s to 14-bit through Super-Bit Mapping), Deep Color, and true 24p (X series has 60p as well). There is so much more, and I am so jealous of Japanese consumers. Check this out:

The screenshots above are from a DoCoMo cell phone, and more importantly the G-Guide software, which allows cell phone users who own these new units to control their recording schedules remotely. other cool software features include automatic recording of favorite shows, automatic chapter creation, faster dubbing of HD to BR, x-Pict and x-Scrapbook for creative photo display, and more. I think it’s time for me to move to Japan.

Check out an awesome review and many more pictures of the devices and of the recording quality at AV Watch Electric Zooma!, the general AV Watch announcement, and Sony Japan’s announcement. Click on any of the below images for a larger view.