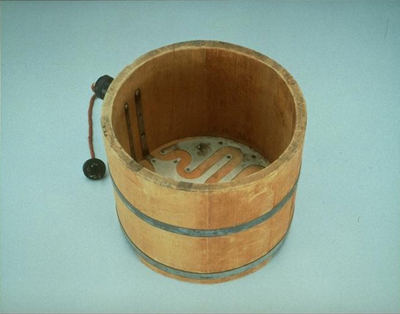 In September 1945, Masaru Ibuka returned to Tokyo to begin work in the war-damaged capital. A narrow room with a telephone switchboard located on the third floor of the Shirokiya Department Store (Tokyu Department Store which closed on January 1999) in Nihombashi became the new workshop for Ibuka and his group. Having barely survived the war fires, the building had cracks all over its concrete exterior. Without windows, the new office was small and bleak. Gradually, the office environment started to improve as the silicon steel boards, drilling machines and other equipment were transported from the Suzaka factory, and the personnel who had been tying up loose ends there joined the Shirokiya staff.

In October, Ibuka and his group established a new facility, called “Tokyo Tsushin Kenkyujo”(Totsuken), or “Tokyo Telecommunications Research Institute.” Although everyone was eager to work for the new company and to help rebuild post-war Japan with their engineering know-how, no one knew what to do at first.

Most of the salaries were paid out of Ibuka’s small, and dwindling, savings. To stay in business, they had to do something. After the war, the Japanese were hungry for news around the world. Many had war-damaged radios, or ones that had had the shortwave unit disconnected by the military police to prevent from tuning into enemy propaganda. Ibuka’s factory repaired radios and made shortwave converters or adapters that could easily make medium-wave radios into superheterodyne, or all-wave receivers. Demand for such radios was rapidly increasing.

The shortwave adapters attracted wide attention, and the Asahi Shimbun featured them in its “Blue Pencil” column. As a result, demand increased even further. This article also brought Ibuka and Akio Morita back together again(*). As the war ended, Morita was back home at Kosugaya, in Aichi Prefecture. One day, he read the column that mentioned Ibuka’s name, and he wrote to his friend immediately. Ibuka replied at once, urging Morita to come to Tokyo. Since he had been offered a job as a lecturer at the Tokyo Institute of Technology (Tokodai), Morita wasted no time in moving to Tokyo and in renewing their acquaintance.

In addition to work, radio repairs brought employees an extra reward as well. They often received rice from houses they visited on service calls, in addition to a normal service fee. This was treasured during a time of serious food shortages.

Subsequently, Ibuka’s factory worked on an electric rice cooker (pictured). As the war plants had closed down, there was more electricity than was needed at the time. This surplus fed Ibuka’s desire to produce items which were needed for everyday life. The electric rice cooker, made by merely interlocking aluminum electrodes which were connected to the bottom of a wooden tub, was a primitive product. The result depended heavily on the kind of rice used and the weight of the water. Tasty rice was a rarity, as the rice cooker produced mostly undercooked or overcooked rice. It was a memorable first failure for Ibuka and his staff.

(*) Ibuka and Morita, the founders of Sony, first encounterd each other at the meetings of the Wartime Research Committee that was studying new types of weapons during the war. The two men became close friens, thought Ibuka was more than a dozen years older.