At IFA in 2009 and then at CES in 2010, Sony took the opportunity of international electronics shows to announce the group’s first unified brand message, make.believe, to be used globally and unveil animated 2D and 3D logos. Meet the designers whose teamwork and enterprising spirit brought the logos to life in an interview courtesy of Sony Design.

Here are the principal designers involved with the make.believe design process:

Yamaguchi: The statement make.believe is the first unified brand message used by the Sony Group internationally. But just what form should this message take? How should we introduce it? Answering these questions was the mission of our design team.

In the message, the dot plays a pivotal role in joining two different elements—make, representing action, and believe, a frame of mind. You could also substitute hardware and software for these elements. Besides manufacturing electronics (the “hardware” side of our business), Sony produces a wealth of content, including music, movies, and games (the “software” side). The dot in the brand message is the spark that brings the two elements together, the flash point when new value and experiences are created.

Just adding the Sony logo is not a compelling way to present these concepts. Instead, we thought of adopting an animated logo as our key visual for introducing the new brand message. Normally we finalize static logo graphics before considering how to animate them, but this time, we took the opposite approach.

We also knew that a new age is finally dawning in 3D video. Sony is united in supporting the move to 3D at all stages, from movie production to screening in theaters, from hardware to finished content. It seemed fitting to create versions of the animated logo in both 2D and 3D. But for us, this was an unprecedented challenge. 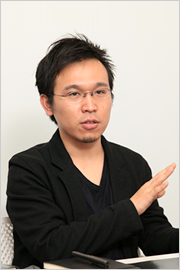 Jogano: In the animation process, I began by creating a traditional 2D logo sequence. This appears at the end of Sony TV commercials, for example, where time is limited. In just 1.5 seconds in Japan and about twice as long overseas, the animated logo had to convey our brand message concepts accurately and memorably.

I chose the dot in make.believe as the focal point of the image. The sequence opens with curtains of light emanating from the center. Dazzling rays in two colors symbolize the two concepts of make and believe. The image resolves into a dot, and then the brand message appears. The organization and images are simple, because it was intended to be used by many group companies. No matter what Sony business the logo promotes, it must convey the message clearly and consistently. For this reason, an animated logo that’s almost too simple was perfect.

The hard part was 3D optimization of the animation. Objects seem three-dimensional to us because of parallax, differences in focus, and other visual cues, but these cues are not available to us when the object is light. Is it even possible to make light appear three-dimensional? Fortunately, we could call on the resources of group companies Sony Pictures Entertainment and Sony PCL. These companies have extensive experience in 3D movie production and technical consulting. Adapting our engineers’ advice to suit our needs, we found a useful approach in design.

My solution was to sprinkle some points of light in the background (like a starry sky) and to add lens effects and rays of light. These objects become part of the image as a whole, making it look three-dimensional. 3D optimization was done at Sony PCL and checked using their 3D projection system. It was refined again and again, as we sought maximum effect from a minimal performance. Ultimately, I think we successfully retained the 2D appearance in an immersive 3D sequence worthy of the Sony name.

Nagahara: Some sounds are etched in our subconscious and move us more than visual images do—when we know intuitively what product or company it is, just by hearing the sound a product makes or an audio logo. Sony knows the power of sound, and besides our other design resources, we can develop sound design internally.

For the audio portion of our animated logos, Nobuhiro asked me to create “the sound of light” and “the sound of the two elements of make and believe.” Not very easy tasks. Manabu and I brainstormed about approaches to take in sound design.

It was insightful to consider the dot as a spark. To imitate a kind of ignition, the attack should be sharp, preferably with a serious edge. For the two elements of make and believe, it seemed simplest to combine two contrasting sounds.

Fujiki: We had to strike the right balance. Simply playing chords for the words would overwhelm the sound at the point of ignition. What could we add to single tones to link them? We sampled the sound of tapping or striking all kinds of things and created material on a synthesizer, until we had considered nearly 100 sound sequences.

In the end, we expressed the elements of make and believe with a set of sounds that includes both treble and bass components. We took a simple, pleasant treble component, added a bass component with impact as an accent, and layered this over the sound of the dot in the animated logo. A distinctive tone is used for the treble component, something between the tone of a musical instrument and the sound of striking crystal glasses. In audio logos, just playing single tones on a piano or synthesizer is not unusual. This time, we sought something different in sound design—something that’s simple but lingers in your memory.

Nagahara:The audio portion of traditional animated logos can be in stereo, but 3D animated logos deserve surround sound. People generally have fairly exacting standards in sound. Once you have been enjoying 3D video in surround sound, you’ll find it very strange if the experience is interrupted by a passage in stereo. Instantly, the 3D video realm collapses and you snap back to reality—the spell is broken. 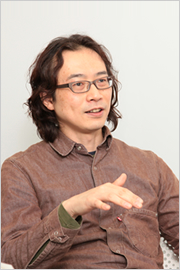 To create a surround-sound version of the audio logo, we set up a special production environment in the design office. In brief audio sequences, it’s difficult to create the effect of surround sound. After trying various effects, such as rotating the stereo images, we decided it would be more natural and consistent with the original stereo sound source to have the stereo images simply spread out.

Maesaka: We also need to introduce the new make.believe brand message in print and other static media. This includes posters and concept booklets used internally as well as store signage, event displays, and other external media. My task was to adapt a dynamic logo to paper media without diminishing its impact or betraying the intentions of the original designers. To do it, I isolated the most symbolic elements in the traditional (2D) animated logo as resources for graphic design.

My creative palette consisted of curtains of light in two colors (representing make and believe) and the glow of the dot. But converting RGB source images to the CMYK color space for printing is not straightforward. The gamut is restricted, and it’s hard to reproduce the original colors in print. What’s more, paper properties, humidity at the time of printing, and other factors cause inconsistency in printed material. We paid close attention to the colors in our first internal posters, which set the standard for printing around the world. Our posters are created in about 40 languages. In printing, it takes a delicate touch to adjust hues, saturation, and contrast to match the original image. 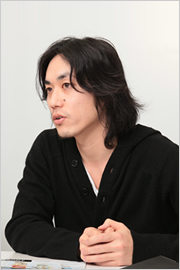 And although we’re all members of the same corporate group, graphic design guidelines vary among Sony companies. Our goal was to coordinate these guidelines and ensure a unified message from the group. Anticipating how the Sony logo and make.believe should be combined in graphic design, we created simulations of the print ads, brochures, websites, product packaging, store signs, and all the other static media of group companies that incorporate the logo, all around the world. After feedback from our local companies, we refined the simulations as needed. It was hard work, as we repeated this process. But it all seems worthwhile now that we see the new logo gradually being introduced by Sony group companies. 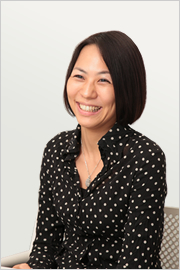 Ikeda: Our logo work was not finished when we distributed the final materials to group companies. Ensuring that it’s used as intended in various areas, media, and scenarios, and that the concepts are conveyed accurately requires ongoing design governance. I’ve been working with the Group Marketing Communication Department (the make.believe project office) to manage overall project progress, help direct the establishment of logo guidelines, and even contribute to related copywriting.

What makes it difficult to establish guidelines is the fact that marketing conditions vary regionally and by group company. It would be easy to establish detailed rules on logo usage and prohibit all other usage. But because this would restrict creative expression, we wanted to avoid rules that were too strict. The guidelines we envisioned are not based on the logos themselves but on our brand message and the concepts involved. If there’s a way to convey the intentions behind our message effectively, that’s what we seek, and considering this possibility can inspire local creativity.

Toward this end, the department assessed local conditions by asking these representatives how we can express the new group message most effectively, and in this case, to cite any points to keep in mind. Their opinions were discussed by our make.believe working group, and in turn, our conclusions were documented. This process revealed that current guidelines needed to be refined, which slowed our progress. It was nerve-wracking to revise our guidelines so often. But ensuring flexibility in creative expression enabled unexpected, unique forms of promotion around the world, which are now seen at events and in stores.

Yamaguchi: Sony group companies represent an array of diverse cultures and marketing strategies. What enables us to understand and adapt to these conditions and speak with one voice (with a consistent message) is a team of in-house designers in close contact with top management. The make.believe logo project demonstrated the advantages we enjoy and was an excellent example of how affiliated departments and companies leverage our combined strengths. 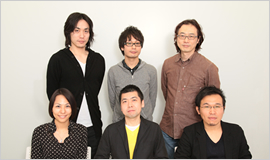