After spending a considerable amount of time at Sony’s CES 2011 booth, it has become increasingly obvious what product is the true star of the show. We tip our hat towards those futuristic concept 3D head mounted glasses.

These aren’t glasses for watching 3D on your television, but rather 3D directly displayed within. Think of it as your own personal theater.

Now bear with us for a moment if owning a product like this seems silly to you. We don’t blame you for thinking that way. In reality, there’s a couple of considerations that make this product seem completely impractical, such as comfort, price, and so on.

According to Sony, these glasses are a 3D “cinematic experience” with integrated surround sound. But what does that really mean? Well, with a built in OLED screen and a 1280×720 resolution, it means these concept glasses ooze quality. Sure, it’s not 1080p, but these glasses are just an early concept and the potential is certainly there. The color reproduction is very high, thanks in part to OLED’s 24-bit RGB spectrum.

The aesthetics of the glasses is something straight out of Tron. The design is a reminder of Sony style and innovation from years ago when the company experimented. The glossy shell exterior is truly stunning, and is complimented by soft blue LED lighting on the front and near the built-in headphones with an illuminated logo on each side.

When I first picked up the glasses, it wasn’t as heavy as I expected. The internal design still looked like a prototype, but overall not too far different than a final product. Putting them on was relatively easy, but unfortunately you had to hold these in place and were not self supported. If and when these glasses come to market I assume that won’t be an issue. 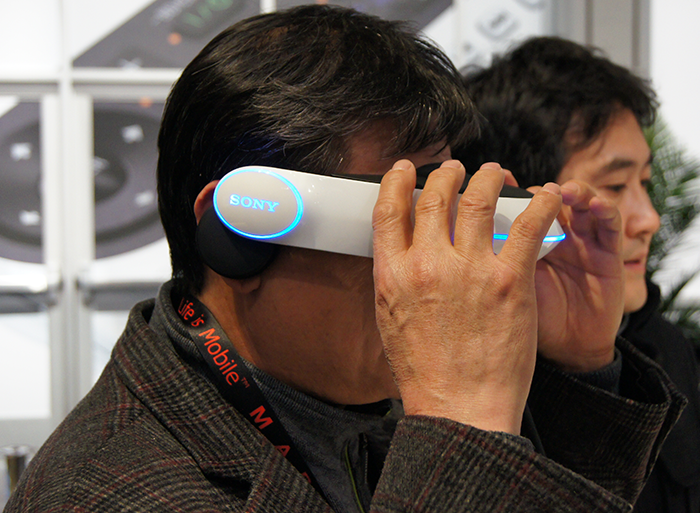 I’ve been a moderate critic of 3D. I think that it was launched too early, but it does offer something different and compelling in selected media experiences, such as live sports, gaming, and so forth. My only gripe has been cross talk, which is that issue where motion doesn’t appear fluid. Cross talk occurs largely because of the high millisecond (ms) response time found in most LCD panels, which only grows worse during 3D playback.

OLED (and Plasma) do not suffer from cross talk issues because the response time is far less than a millisecond. This means that motion appears very fluid, eliminating a common source of headache and eyestrain that people usually associate with 3D. When I put the glasses on, it only reassured me OLED was the ultimate display for 3D consumption. The colors in the demonstration video were vivid, and the brightness was excellent in a demo nature scene with a woman walking through a forest. The 3D effect finally felt natural, especially since its most noticeable issues were gone. An added bonus was the fact that the enclosure of the glasses blocked out nearly all ambient light, which made the experience feel like I was in a theater. Sound quality was difficult to judge.

I spoke to a representative and he noted the glasses would most likely utilize a HDMI connection, meaning it could work with a variety of content sources, including 3D Blu-ray players, PS3, PC, and so forth. The glasses also defeat a major problem the company faces with OLED, as large screen OLED displays are difficult to sell at reasonable prices because of the high manufacturing cost. 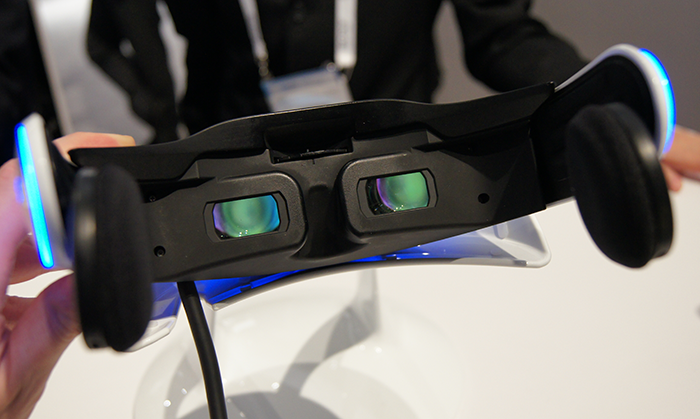 There is no timetable for the release of the 3D head mounted glasses, but with a concept as advanced as this I can’t imagine it would take longer than a year or two. Then again Sony has teased concepts at CES numerous times, many of which never came to market.