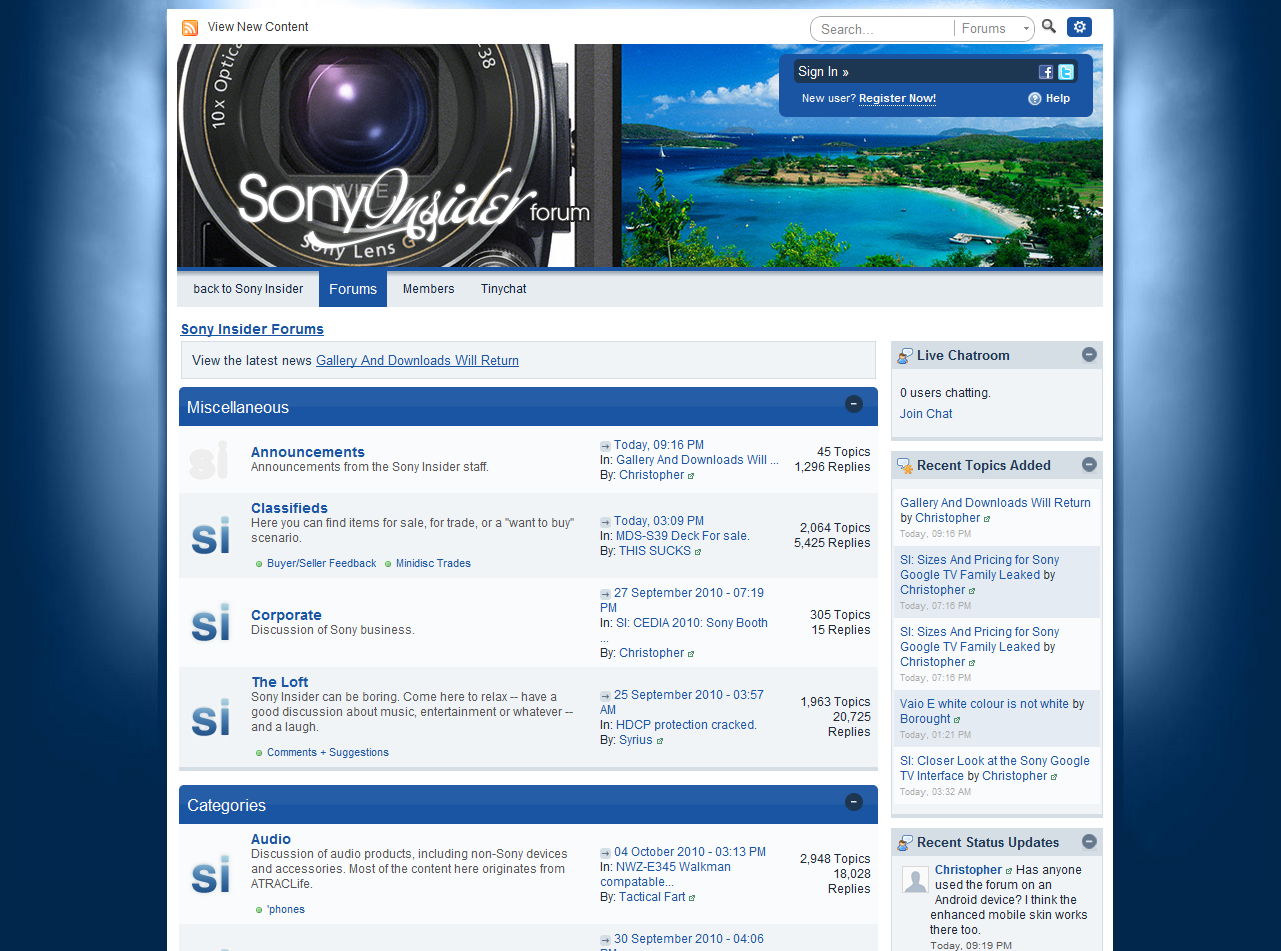 We’ve been working hard over the last few days to upgrade the software and craft a new default skin for the Sony Insider forum. The forum is based on the IP.Board discussion software by Invision Power Services. If you have never used the Sony Insider forum, please spend just a few moments to give it a look over. Please register and feel free to discuss Sony (and everything else) with us today. We would love your company.

The origins of the Sony Insider forum is a story that’s nearly a decade old.

When I joined the Minidisc.org team around 2001, Sony had a lackluster Internet presence and the iPod was barely a household name. Initially, I joined their forum as a fan of the product I had received for Christmas – a MZR-700 Minidisc recorder. I used it to record myself playing bass guitar and I loved the quality. There wasn’t much of a community for me to share it with, however. So, I took the initiative and built the forum up into a community that could support each other and share their works because Sony wasn’t doing it and it had that potential. Things quickly accelerated with the site and suddenly we were the top resource for Minidisc information, support, and product announcements.

More importantly, I started to notice that consumers were using the forums when they had problems with Sonicstage (the music management software for Minidisc and other Sony audio products) and out of those discussions we built comprehensive FAQ’s. We were all helping each other to ensure that we had the most optimal product experience by making it successful for everyone. Sony was quietly watching in the background, and we all knew it, as our recommendations for future Minidisc products and Sonicstage fixes were being implemented – Sony realized we were a voice for the product, and catered to us. It was truly impressive.

As Minidisc faded out, so did my interest and I went on to make a new website called ATRACLife. ATRACLife was similar to Minidisc – it had the latest news as well as hardware and software support. As ATRACLife grew and became a trusted resource for Sony audio players and other ATRAC devices, so did its influence and that’s when I started to receive direct contact from people within Sony who wanted to help. Without realizing it, the site had transformed itself from a collective of consumers to a leader. We worked closely with Sony audio engineers in California, manifested a rich 3rd-party software environment, and also ran a contest with Sony Europe giving away a couple of Video Walkmans. I visited the Consumer Electronics Show in 2006 and met with many people in Sony, all of whom were very supportive and helpful to what I was doing.

Months before the end of ATRACLife I purchased the domain name Sony Insider. The rest is history.

In late 2009, I worked with Invision to merge the forum databases of Minidisc Community Forums, ATRACLife and Sony Insider together. This new discussion forum is one of the largest third party forums for Sony content, with 173,000+ posts and 112,000+ members at the time of this writing.